Thanks for hosting me today, and thanks to the readers who’ve joined up as part of the Hollywood Dreams and Buttercream virtual blog tour. This is stop #3. Be sure to visit all stops to better your chance of winning swag!

First, let me introduce myself. My name is Sandra Sookoo. I write romantic fiction, but over the course of the last year, I’ve primarily focused on contemporary and Regency romance. My latest book is a sweet contemporary.

In many of my books, food of some sort usually makes an appearance. Whether my characters are chefs, home cooks, bakers, food critics or some other sort of food handler, I think food brings people together. Food, in a way, is a universal language.

In my new book, Gwynn manages an ice cream shop, but she also dreams of decorating cakes. The hero, Cole, is a foodie as well. He writes an article in the newspaper about food… but his identity is secret and he hasn’t told Gwynn. What could go wrong, right?

Here’s the blurb for Hollywood Dreams and Buttercream: 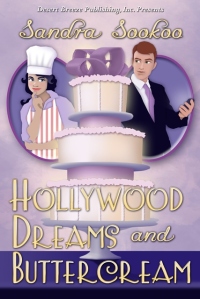 Sometimes the sweetest things in life don’t have anything to do with dessert.

Gwynn Flannigan wants respect from her father and freedom from her big, loud family. The icing on her cake would be to win a decorating competition hosted by her favorite food magazine writer. Cole Marshall’s one outlet from the stress of business life is writing his Cooking in the Buff feature. Who cares if he never has time for fun?

The answer for them both lies in the deep freeze at Sweet Endings, the struggling ice cream shop Gwynn manages and the one property Cole needs to secure a big promotion. He’s stuck in Madrigal, Indiana to unravel a knot of family drama that drives him crazy.

Things heat between Gwynn and Cole on the competition floor when Cole’s alter ego is revealed.  Cake and accusations fly while dreams and goals are left crumbling. In order to balance family, business, and love, Gwynn and Cole will need to work together and become partners—in more ways than one.

And here’s an excerpt:

“I apologize for Gwynn’s behavior. She’s usually funny and caring and a much nicer person when she not being a witch. But, she’s rude. There’s no other way to explain it. In her defense, hanging around the Flannigan men would make anyone crabby. Just overlook that tendency and you’ll be fine.”

“Sarah!” Gwynn’s jaw dropped. I can’t believe she threw me under the bus.

“Trust me. I’ve seen much worse behavior in much nicer people.” Cole’s lips twitched, but a smile never materialized. “Maybe we did get off on the wrong foot.” He held out a hand. “Hi. I’m Cole Marshall. I’m sure you’ve heard I’m handling the sale of Sweet Endings.”

“Yeah. I’ve heard. Gwynn’s been talking about you, and not in glowing terms.” She shook his hand with a lifted eyebrow. “I’m Sarah Hubble, Gwynn’s best, and probably only, friend. I guess I’m just too lazy so I stick around. If nothing else, she makes me laugh.”

“I have other friends.” Gwynn frowned. Just watching the way Sarah practically slobbered over Cole made her want to punch something — or eat another half-pint of ice cream. The frown edged into a full-on glare when Sarah continued to chat about mundane things. This time he almost smiled. “Get a room you two.” Her weird dip into jealousy melted as quickly as popsicles in the sun when Cole turned his gaze on her — all 1000 watts of green lightning that turned her insides to mush and made her heart do a coronary version of a country-line dance. It was really too bad such a to-die-for face had to be the cover for a cold-hearted businessman. “I don’t need coffee.”

“Actually, getting a caffeine infusion would be the best thing for you right now.” She nudged Gwynn a little farther in Cole’s direction. “Be careful when you take her out in public.” Sarah winked at Cole and urged Gwynn another step. “She’s not used to people, ya know, since she keeps herself locked here in the shop all the time. It might take her a while to thaw.”

“Seriously? I’m not ice cream.” What was up with her friend?

“That’s the truth. Ice cream has more sugar.” Cole glanced at his watch. “I suppose I could make time for breakfast.” He lifted his gaze to Gwynn’s once more. Some of the animosity had faded. “We can discuss the finer points of the real estate transaction.”

“Sure. A write-off.” She threw a helpless glance to Sarah, who shrugged and waved with a smile. “Uh.” How was she supposed to act with a guy who intended to take away her business — her dream? “You don’t have to do this. We can go our separate ways as soon as we’re a block from the store.”

“Neither do you. I’m perfectly capable of returning later, but I’m trying to be the bigger person and maintain civil relations. I’d rather not have the deal go south and involve legal orders.”

It was on the tip of Gwynn’s tongue to make use of his easy exit, but he quirked an eyebrow in what she interpreted as a challenge. If he could be the bigger man then so could she… er, the bigger woman. “Actually, coffee sounds good. You have a choice. Java John’s or Bean Around the Block. They’re both good. One’s quieter than the other since you obviously intend to work.” She shot a glance to his laptop bag.

“Coffee is coffee. I don’t have a preference, but I did already stop at Bean Around the Block once today. Anything has to be better than the complimentary brew at the B & B.” When they reached the front door, Cole held it open and guided her out with his other hand at the small of her back. “By the way, without work, a man is nothing.”

“I think a man is nothing without some fun in his life.” Tiny tremors climbed Gwynn’s spine from the point of contact. Not liking how she reacted to a simple, everyday touch, she moved away from him and marched down the sidewalk. Her sandals made short, slapping noises against the pavement. When he matched her quick stride, she snorted with annoyance.

You can purchase this book at the following locations:

Have we connected on social media yet? If not, here’s my info. I’d love to talk to you!

Giveaway information on this post: One lucky random commenter will receive a Hollywood Dreams and Buttercream swag pak. Be sure to leave your contact information.